At the most basic level, participation means people being involved in decisions that affect their lives.  Through participation people can identify opportunities and strategies for action, and build solidarity to effect change.

Participation matters as a core value in open and democratic societies, and increasingly is recognised as a ‘right’ through global human resource documents. Participation challenges oppression and discrimination, particularly of the poorest and most marginalised people.

Meaningful participation is dependent on people being willing and able to participate and express their voice.  However, this may be challenging where people feel intimidated, lack certain knowledge or relevant language to understand and contribute, or even feel they may not have the right to participate.

In addition, practicalities often mean that representatives of a particular group will participate rather than each individual engaging directly, which raises risks that some interests will not be represented or processes will be co-opted by elites or by certain groups.

The dynamics of participation for economic advancement will depend in part on who creates the space for participation to happen, defining the scope and processes involved.  Participation has been used in different ways by different actors and under different circumstances.

Participation in economic advancement will also be strongly shaped by power relations between the different individuals and organisations involved in these processes, so understanding how power works is central to enabling meaningful participation.

Jodie Thorpe is a Research Fellow in the Business and Development Centre at the Institute of Development Studies, with over 15 years' experience in research and advisory work. With a background in political science, her interests and current projects include public-private partnerships in agriculture, inclusive business, making markets work for the poor approaches and systemic change in business and development initiatives.

Marina Apgar is a Research Fellow in the Participation Research Cluster at the Institute of Development Studies. She is a human ecologist with 20 years experience working directly with marginalised communities in international development to support locally defined development pathways.

Eldis content is published under a under a Creative Commons Attribution Unported (CC-BY) licence. You can embed this guide in your own website.

Add this to your site:

It is crucial to understand power – particularly economic power – and how it operates and affects who participates and whose voice is heard in decision-making processes, and who is economically disenfranchised.

There are different forms of power with different implications for participation.

‘Power within’ is a person’s sense of self-worth and self-knowledge that enables participation.  Shifting power within means changing the way a person views their abilities and self-worth, helping them to understand their own strength and potential.

Continue reading: Where can participation happen?

Where can participation happen?

Participation can happen in many different ‘spaces’ where economic decision-making takes place.  These include formal spaces like legislative bodies or company boards, but importantly they also include informal spaces like community groups, or even one-off events like protests.

They may be physical locations as well as non-physical spaces such as online consultations and can exist at a macro level (e.g. national deliberations on interest rate policy), meso level (e.g. a National Farmers’ Association) or micro level (e.g. an enterprise).

Closed spaces are those that are hidden from view or accessible only by elites such as political policy-makers, bureaucrats or those who own financial capital.  They include global trade talks and fora such as the G8 or the World Economic Forum, as well as board meetings of companies and negotiations between company executives, and the procurement decisions of local governments.

Policy is made and capital allocated without involving or consulting those affected.  However, in some cases, through advocacy and protests, those who are disenfranchised have been able to partially open these closed spaces to their involvement.

Invited spaces are those where economic and political elites bring participation into existing spaces.  These may include policy processes, investment processes, and grant-making processes.  Participation is often supported by providing information or consulting formerly excluded groups to get their feedback on issues or decisions, such as funders who ask feedback from beneficiaries.

It might also involve supporting people to feel they have economic literacy and the ability to participate in economic decision making.

Claimed or created spaces are the result of those who are currently excluded in the economic sphere developing their own processes and business models, based on mutual support, solidarity and collaboration, such as worker-owned enterprises and cooperatives, or local exchange trading schemes.

Continue reading: The spectrum of participation

The spectrum of participation

Participation can range from more nominal forms of engagement through to those that are empowering and transformative. To be empowering, participation must move from nominal participation, in which an organisation or decision-maker is seeking legitimation of their decisions or as a means to achieve cost-effectiveness, towards models that give people a voice in determining their own development and ultimately enable them to decide and act for themselves.

One way to conceptualise different degrees of participation is to think about the goal of the process and with it offers to those on the receiving end. 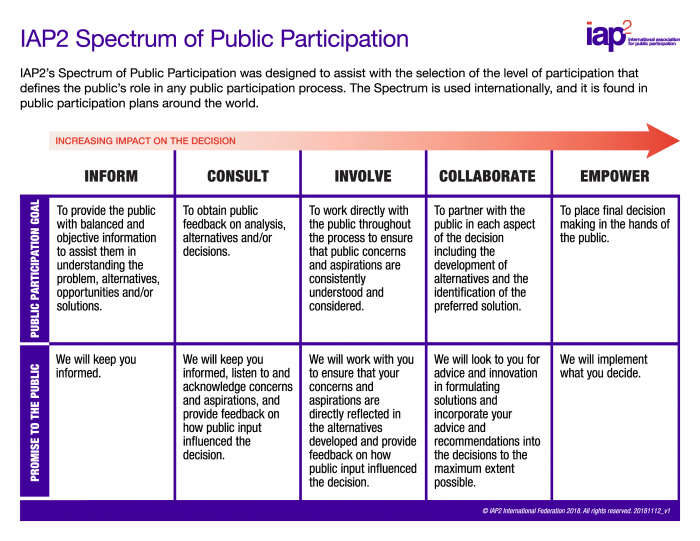 This spectrum can range from informing to empowering.

Consult means obtaining feedback on decisions and alternatives, where decision-makers acknowledge the concerns of others.

Involve means working with people to understand and take into account their concerns and aspirations, in order to reflect these in decision-making.

Collaborate means decision-makers working together with people on each step of the decision process.

Finally, empower means putting the final decision-making power in the hands of those affected.

As part of our work, we have produced a primer designed to help programmes that aim to build participation into economic decision-making to better understand what ‘participation’ means. You can download the primer here to read in full.

Continue reading: Back to introduction

Power, poverty and inequality
Institute of Development Studies UK, 2016
Ten years on from the landmark 2006 edition of the IDS Bulletin that brought us the ‘powercube’ – a practical approach to power analysis that offered a way of confronting its complexity – we return to the question of how to analyse and act on power in development.This issue focuses on the ways in which invisible power can perpetuate injustice and widen inequalities.
Introduction: Exploring power for change
Institute of Development Studies UK, 2006
Concepts and methods of ‘participation’ are used increasingly throughout the world in shaping policy and in delivering services. These participatory approaches throw new light on the complex interactions within and between society and state institutions at local, national and global levels. Participatory approaches lead to questions about how different kinds of knowledge and values shape the rules of the game and policy choices.What are the societal and political processes through which power operates that inform whose voice is heard and whose is excluded?
What next for power analysis? A review of recent experience with the Powercube and related frameworks
Institute of Development Studies UK, 2012
The Working Paper aims to contribute to a growing pool of experience of applying power analysis for improving social activism and organisational practice.